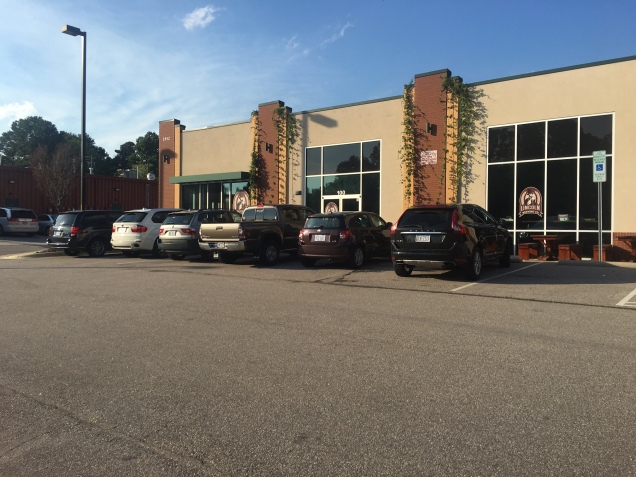 My first reaction when the Brew Crew and I walked into Lincoln Brewing was “They have a lot of beers on tap”. This is definitely the kind of place you could bring a crowd of people with diverse taste and everyone could find a beer they enjoy.

Lincoln Brewing Company owns and operates a bottle shop in Raleigh as well as this Fuquay brewery. I would think that owning a bottle shop would give them an advantage in understanding the trends of craft beer drinkers’ taste. Perhaps, instead they simply realized that craft beer drinkers like a real variety in styles and types of beer. This variety is what you can expect when you visit Lincoln Brewing.

Lincoln Brewing is located on the far northern outskirts of Fuquay-Varina, almost in Garner. It is located in back of a strip retail center along with a pizza joint and sushi place. Outside food is welcome at Lincoln;  we noticed a number of the patrons were enjoying pizza from the neighboring establishment. According to their website, food trucks also frequent the brewery. So, hungry customers will be well taken care of. 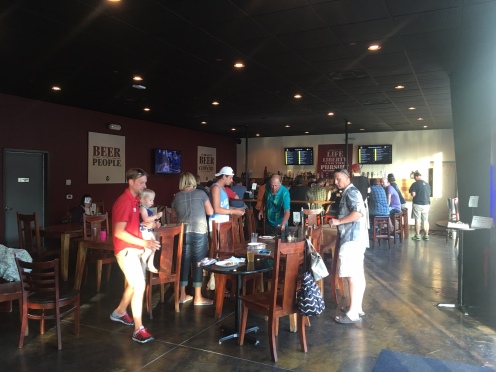 Live music can be found at Lincoln fairy regularly. No live music was present during our visit. However, this is a family-friendly/dog-friendly environment so a few kids and a puppy provided us with plenty of entertainment. Speaking of it being family friendly, I think it is fine to have a family-friendly taproom, but at the time of our visit the children made up a significant percentage of people in the taproom and with nothing to occupy them they became a bit distracting to the other patrons. 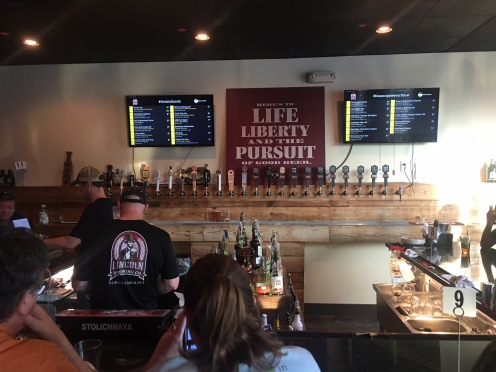 The staff was approachable and appeared to be working hard to keep the customer’s cups filled. The horseshoe-shaped bar was full, making it uncomfortable for people trying to order drinks and those at the bar that had people reaching over them to pay. Please note that this is not a bad problem to have as it means that the place it out growing its current setup. Many breweries would love to have this problem.

Some sidewalk tables can be found if you prefer to drink outdoors. But not many patrons were using them at the time of our visit. In truth, the view of the ample parking area probably isn’t a great draw to this space.

As mentioned earlier in the review, the beer selection was vast. They have 24 taps featuring a number of styles and types. About half the taps were dedicated to Lincoln’s brews, but they also offer a number of both local and national craft brewers on tap. We only sampled the beers brewed by Lincoln Brewing Company during this visit, and found them to be “Honest Ales”. The following were a few standouts…

Lincoln .58 Caliber IPA – Every brewery should have a good IPA. This is a solid one that helps them check that box. They also had a variation of this beer on tap at the time of our visit, Mandarin Orange .58 Caliber. The Brew Crew and I all felt the sticking with the original is the way to go.

Red Legged Devil – I have been lucky to have had some masterful Belgian Strongs as of late. While this is a good version of the style, it falls a little short of the top-tiered category. I think anyone who likes this style could enjoy a pint of Red Legged Devil.

Reconstruction Rye – This was the favorite beer amongst all of the Brew Crew. A really good rye, that does invoke days long past. We would say if you were to order one beer at this brewery (and why would you order just one beer?), this would be THE beer!

Mad Mary Saison – Enjoy the sunshine with this refreshing Saison. They offer a variation of this beer with strawberry that might be worth a try. We were split on which we liked better.

Cream Sickle Orange Cream Wit – I love cream sickles but tend not to like sweet beers. This one was subtle and I personally couldn’t quite pick up cream sickle out of the flavor. But, I was pleased with the refreshing summertime essence of this beer.

Lincoln Brewing has a lot to offer. We would advise you to stop in and let us know what you think about it.