When Virginia and I left Durham and moved to Laguna Beach in 2010, there wasn’t much of a craft brewery scene in the Triangle. We pretty much instantly fell in love with the natural beauty and perfect weather of Southern California, not to mention the region’s fantastic beer culture.

So it was hard to move back to North Carolina in the fall of 2013. But something amazing had happened in the three years we were gone: the Triangle had become a vibrant, up-and-coming area for great craft beer. We bought a house near Eno River State Park, and it turned out that location placed us less than 15 minutes to Durham’s Fullsteam brewery, and less than 15 minutes to Hillsborough’s Mystery Brewing Co. — neither of which existed when we left Durham in 2010. In the three years since, they have become our two go-to spots — a pair of wonderful, risk-taking breweries that take pride in their roles as gathering places for the community.

What took us so long to write up our two favorite breweries? Call it the intimidation factor — we were just TOO familiar with them, and there were so many beers to describe because both spots are constantly rotating their beer lists … we didn’t know where to start. But I’ve worked up my courage, so it’s time to unravel the mystery of Mystery (I promise, we’ll get around to Fullsteam too!). 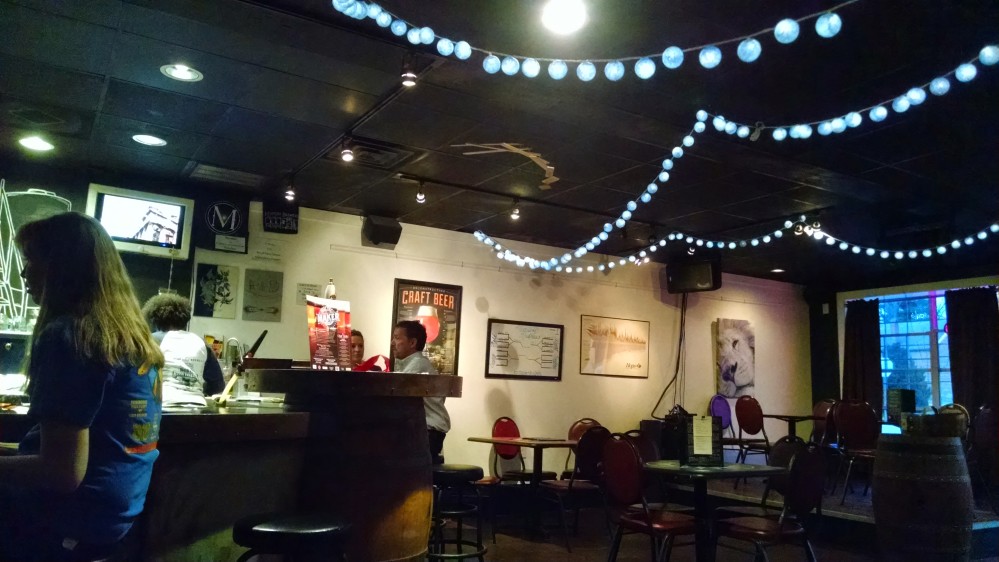 Mystery’s Public House is located about a mile West of downtown Hillsborough on a stretch of old industrial buildings that have been charmingly repurposed as a handful of businesses (there’s another pub at the end of the block, and in between is Hillsborough BBQ, where you can place a to-go order and they’ll be happy to deliver it to you at Mystery). The brewery itself is located another minute down the road, past the entrance to Gold Park, where you can work off those beer calories with a stroll down Hillsborough’s new Riverwalk.

The interior of the Public House is cozy, although a kitchen expansion and additional seating are rumored to be in the works. There’s also a spacious rear courtyard with picnic tables, where dogs are welcome. You can usually run into a core group of regulars on the bar stools inside, and the fantastic bartenders (general manager Ari, plus Arwen and Ashley) help to create a community pub vibe. That vibe is enhanced by Mystery’s great weekly events calendar — a lively quiz night on Wednesdays, live music on weekends, cask night on Thursdays, and of course Beer Church on Sunday afternoons (complete with a glass giveaway). There’s even a monthly book club that meets in the Public House, hosted by Mystery owner Erik Lars Myers’ wife, Sarah Ficke, a professor of literature at Marymount University.

Not coincidentally, you’ll notice a literary theme when you order your beer — all the beers have literary or historical-themed names. You’ll also notice a large beer list that rotates seasonally. Mystery does not have any year-round staples; instead, they unveil a “Core Four” of recurring selections with every season, and a wide variety of “Novellas” — which are often one-offs. Mystery isn’t afraid to incorporate unusual ingredients to create unique beers; it’s a big reason we love it.

On that note, let’s get to some of the beers on tap this summer. Many of these are still on tap, and a few others are not, but this list gives you a good example of what to expect at Mystery.

Not A Day Older – Rye berlinerweisse with black pepper. Tart but balanced by the rye. Sour and spice on the nose. Finishes with the black pepper, gives it some lingering heat on the finish. Fantastic. Very sessionable at 3.5 percent.

Keen – Salted caramel gose with peaches. Candy apple nose, and the caramel is strong too. You get the sweetness of the caramel, some tartness and fruit, and lingering salty caramel finish. A little too candy-like for me, but this was one of Virginia’s favorite beers this summer (she LOVES candy!).

Hooray for Ellerbe – Flower-powered pale ale. Honeysuckle and slight hops nose. Very sweet floral flavor, minimal hops. Very perfumy, like a gardenia or maybe a hyacinth. I get a honey flavor. Very drinkable summer beer. I picked up a few four-packs of this to take home with me over the course of the summer — this is a great beer to drink out on the back porch on a summer afternoon.

Gin Blossom – Brett sour with apricot and juniper berries. A little bit of a vinegar nose, tart up front, lingering berry finish. I like it, but Virginia is not in love with it. Usually Mystery’s sours and wild ales are our go-tos in the summer, however.

Caswell – Historic ale with corn & molasses. Brownish red in color, sweet but not too sweet, a nice toasty/roasty character. Moderately hopped but nicely balanced. Successful beer. It exceeds our expectations.

Evangeline – A core four beer.  Rye Saison – crisp and clean, be careful because it doesn’t taste like 8.1 percent. Slightly bready, golden color, slight bitterness up front but a clean finish. They say it has pineapple notes, and I get it now that I know to look for it.

Papa Bois – A tropical stout, another core four beer. Light malt on the nose, fruit up front on the palate, fruit doesn’t linger, finishes with dark roasty malts but not too heavy. Nice surprising summer stout. You don’t usually think of stouts when you think of summer, but this beer makes good use of tropical fruits and just seems to fit the season. Sometimes you want a dark beer in the summer, and now you’ve got a great seasonal dark beer in the middle of July. I love this concept.