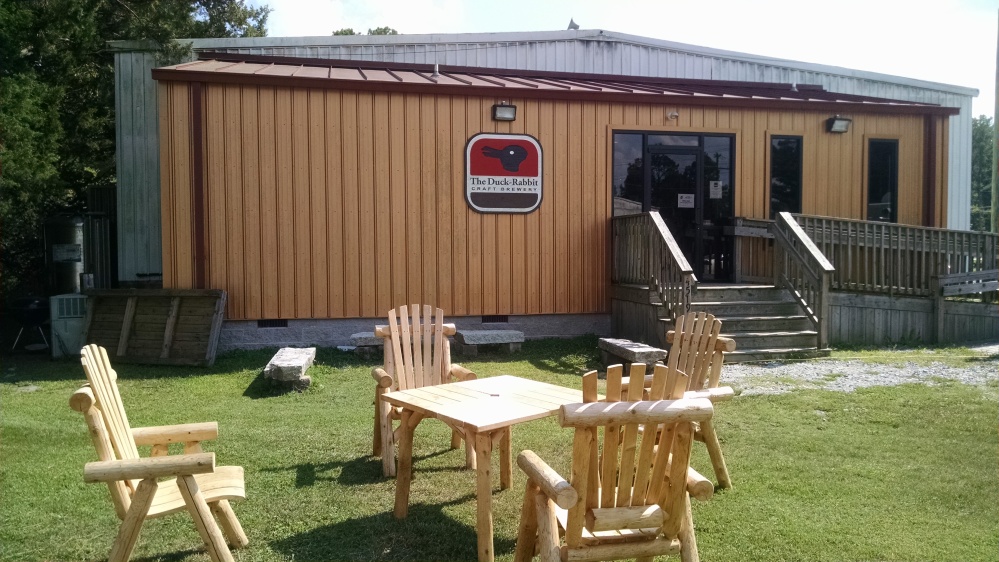 Most beer drinkers in North Carolina are probably familiar with Duck-Rabbit — one of the most successfully distributed craft breweries in the region. Duck-Rabbit’s Milk Stout, Brown and Amber ales are grocery store staples all around the Southeast, ranging from Florida to Tennessee to as far north as Pennsylvania.

You might be surprised, then, to learn that Duck-Rabbit’s taproom is just four years old, and it is far more modest than you’ll find at many lesser-known North Carolina breweries. The brewery itself has been around for 11 years, but it focused on distribution until the last half-decade or so, when the town of Farmville gave the brewery a grant to build a taproom.

Tucked away in an unassuming warehouse district in the small agrarian community of Farmville (just outside Greenville), Duck-Rabbit’s taproom looks a small, vinyl-sided afterthought tacked onto the side of a warehouse. It features a little bar that seats five, a pair of tall tables — and that’s it. When we visit on a Friday afternoon in the summer, locals in overalls and work clothes sat at the bar making small talk with a woman named Rocky, the gregarious bartender. 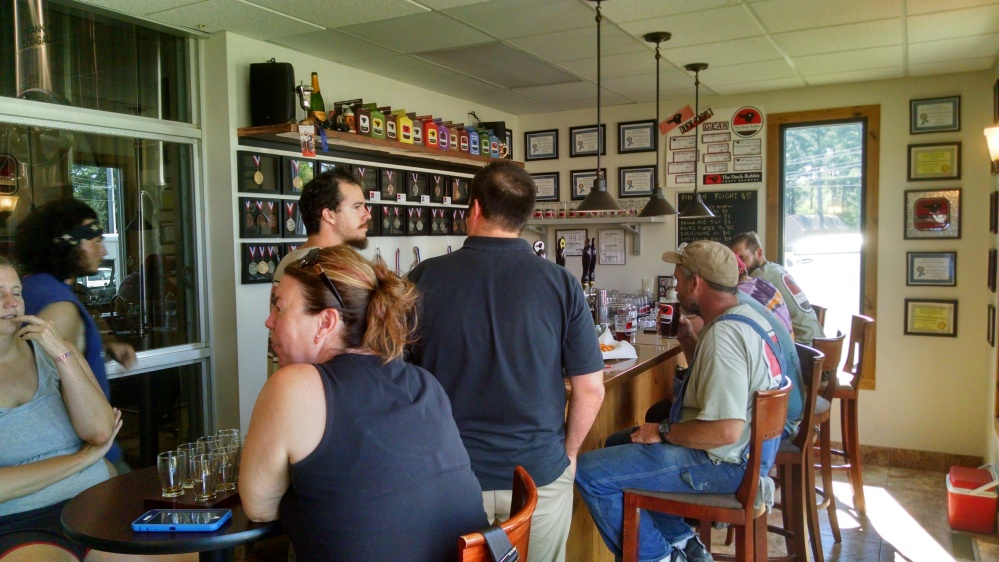 “You’ve really legitimized the place,” one regular tells Rocky. She later confides to us that she’s had to convince the owner that people would actually show up for a taproom, but it is growing in popularity. Some people like to come before church — and after. Others come on Friday and Saturday nights, when Duck-Rabbit has started bringing in food trucks, like the Sizzle Shack that was parked outside the day we visited. Duck-Rabbit also is happy to provide some snacks for no charge.

The place is undeniably homey, a Cheers for the craft-beer-drinking Farmville set. A couple of men finish their drinks and head outside to play Wiffle ball in the driveway and lawn in front of the brewery. There are some nice wooden tables and chairs out on the lawn, along with a cornhole set, making this a nice destination for a little summer evening fun. Be prepared — they only take cash or checks, no credit cards.

At one point during our visit, Rocky points to the Duck-Rabbit logo behind her and asks Virginia and I what we see — the duck or the rabbit? “Duck,” I say without hesitation. “Rabbit,” says Virginia.

“That’s why y’all are perfect for each other,” Rocky answers.

The other distinctive feature of the taproom is a huge collection of medals adorning the wall behind the bar. Duck-Rabbit specializes in dark beer, and they do it very well. They only had a handful of beers on tap the day we visited, but they were all good. Let’s start with the staples.

Milk stout – Rocky says this beer accounts for about 60 percent of Duck-Rabbit’s sales — “Definitely our flagship.” It’s creamy and rich, with a little hop finish. Just an outstanding beer.

Amber ale – At 5.5% ABV, this is just a nice, drinkable amber — not as malty as a lot of ambers we’ve had lately, also not hoppy. Just a nice clean ale.

Baltic porter – This is robust at 9% ABV, and you get that strong alcohol taste, but also some nice rich sweetness on the finish. A standout for us.

Duck-Rabbit has plenty of other quality offerings that you can’t get in grocery stories, depending on the tap rotations. We stopped at Duck-Rabbit as part of an Eastern North Carolina swing that also included Mother Earth down in Kinston. I’d recommend making a similar circuit. Duck-Rabbit might not be a destination taproom, but few places give you a more authentic rural North Carolina craft beer experience, and fans of dark beers won’t find many spots that do it better.