Fainting Goat is more than a funny YouTube video; it is Fuquay-Varina’s newest brewery. Fuquay-Varina is one of my favorite craft communities. Asheville is clearly the Capital of Craft in North Carolina, Raleigh and Charlotte have a wonderful growing market of breweries, and Wilmington and Fuquay have great craft beer clusters. With Fainting Goat’s arrival, going to Fuquay for brewery tourism is now even more compelling.

It would be understandable to want to try and compare the Fuquay-Varina breweries. However, Fainting Goat will not let you make that comparison easy. Fainting Goat takes pride in differentiating itself from most NC brewers by focusing mostly on sour and tart beers. (You will not see a lot of sours at Aviator or Draft Line just down the street.) This is a wise strategy that might go a long way in helping this brewery stay relevant in an increasingly competitive craft beer environment. 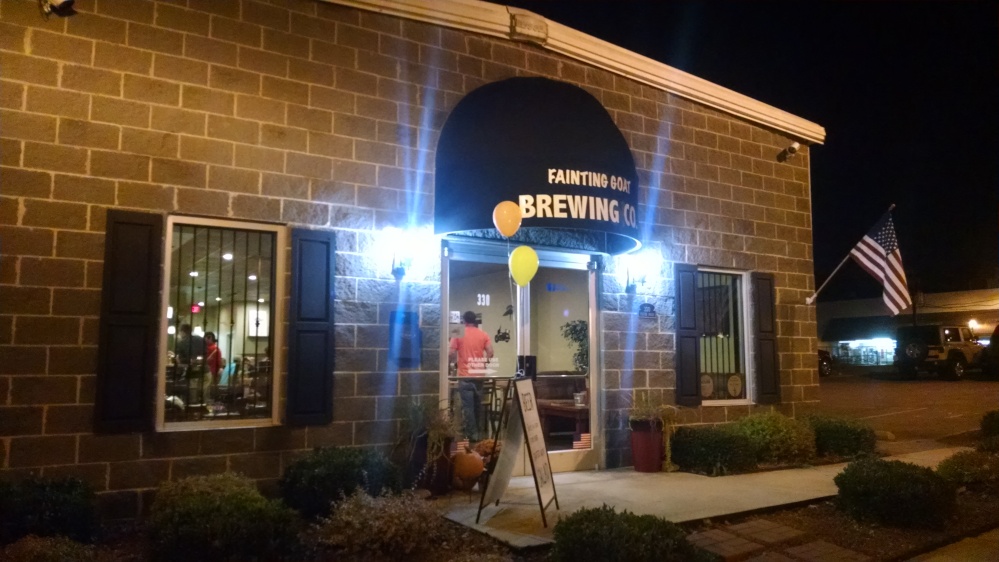 Currently, Fainting Goat is only open on Thursday, 4:30-11:00, Friday, 4:30-12:00 and Saturday, 1:00-12:00. The taproom is a great space. Modern, functional and a great place to drink a pint or two, I really enjoyed spending time here. The large bar was well staffed on the nights of my two visits to this brewery. The owner, Tim, was willing to spend time talking beer with us and the rest of the friendly staff goes a long way to adding to the patrons’ enjoyment of the brewery visit experience. Fainting Goat also has a terrific outdoor patio for enjoying your brew under the stars. Just imagine your “Brew Crew” enjoying the fire pit and meeting other beer enthusiasts in an environment that encourages you to interact with others.

While they don’t serve food at the taproom, they have a wonderful relationship with downtown Fuquay restaurants. Just ask for a menu at the bar, call in your order (we had wings and nachos for the restaurant across the street) and they walked our order over to our table in the taproom. They do have food trucks from time to time, but with the restaurants delivering to the taproom I don’t think they need the trucks.

I visited this newcomer twice in one month – once with my wife and the second time with the Brew Crew. The wife loved the tart beers offered here. As a matter of fact, my wife, who tends to like ciders over craft beers, loved the beers here so much she considers this to be one of her favorite North Carolina breweries. I was less than blown away, feeling that it was likely just not my style preference. I chose to return with the brew crew to get their opinion of this unique beer. They, like my wife and I, loved the comfortable taproom and the friendly staff:  “There are a lot of things they are doing right,” was the general comment.

Fainting Goat is a small batch brewer. I would expect the beers they offer to change often but here are the beers we sampled:

I am very glad to have Fainting Goat as part of our craft beer community. With their emphasis on the sours, I would love to see some collaborations with other breweries that do sours, such as Sub Noir, Mystery or Haw River.

I look forward to my next visit to Fainting Goat. No doubt my wife will want to drop in the next time we find ourselves in Fuquay. I would strongly encourage anyone to do the same.