Carolina Brewing Company keeps it simple: In the vast majority of its beers, CBC uses just four ingredients – hops, malt, yeast and water. The results helped kick off a movement in North Carolina brewing. Founded in 1995, this brewery might accurately be described as the grandfather of craft brewing in the Triangle, a community that now boasts more than 20 breweries. Clearly craft brewers and craft beer drinkers owe a debt to CBC for paving the way.

In 2001, I was part of a group of friends who had a regular poker game on Saturday nights. These games were hosted by a buddy with a kegerator that was always stocked with Carolina Pale Ale. The beer was free so this is the beer I filled my mug with week after week. For me, it wasn’t love at first taste. I remember being overwhelmed by an earthier, hop flavor I was unaccustomed to from drinking the tasteless, mass-produced domestic beers for so long. But in short order, my palate started to crave the more complex flavorful beers found in the craft industry and losing at poker was far more enjoyable. Carolina Brewing Company was also the first brewery I ever visited; they did brewery tours on Saturday and after the tour you could stick around and sample the brews and talk beer with the owners.

Do not read this review and think that because I have reverence for this brewery’s history, that it is past its prime. That is certainly not the case with CBC. In August, they opened their taproom (yes, this brewery was operating 20 years without selling beer onsite). Additionally, they have never offered such a variety of great beers.

The taproom is a reflection of who they are as a brewery. Keeping It Simple, they don’t serve food (except some packets of beef jerky or packaged potato chips); a food truck might be found on some Saturdays. They rarely have live music and, while they have a couple of flat-screen TVs, you wouldn’t mistake them for a sports bar. They don’t have a theme (Pirate, Bicycle or Disco) that they are building a brand or decor around. What they do have is a great selection of their masterfully crafted beers, a basic comfortable taproom, the game on TV, and knowledgeable servers excited to talk about the incredible beers they make. By the way…I have it on good authority that they like to answer questions about what kinds of nuts are used in the nut brown ale.

Speaking of the beers, many of the regular readers of this blog know that I usually pick about four selections that I’d like to highlight. Well, my brew crew and I would find it difficult to limit the discussion to just four of these fantastic brews. The following are some of the ones we were most excited about…

Carolina Pale Ale– The classic that started it all. Oh heck, I know that there are a number of very good Pale Ales made in NC. But I’ll always have a soft spot for the Ale. It is still a solid choice and never disappoints.

Hop Roar West Coast IPA– Brew Crew founder and friend Ed S. loves this beer. Ed has always been a bit of a hop head and he was in heaven with this beer. It has a noticeable floral nose, a citrus (grapefruit) hoppy palate and a less than clean hoppy bitter finish.

Wiggo– This is such a fun beer they had to play with it a little, and on the day we sampled, they had three versions of this red IPA. I must say I liked them all but I really enjoy the plain Wiggo. It is a very well balanced IPA with a great finish and nice flavor. A must try, in fact as I write this review I regret not having brought home a growler of this beer.

Wiggo Bourbon Barrel aged– Usually when a brewery has several variations of a single beer (like Wiggo) I kind of cringe. But in this case by placing the Wiggo in Wild Turkey Whisky Barrels it changes the flavor profile in such a dramatic way that it is well worth adding to your flight selection. If you enjoy both whiskey and craft beer you probably will want to order a pint.

Oktoberfest– I enjoy this time of year. I’m not a big fan of pumpkin ale but I do like a good Octoberfest. This one is a good example of the style, perfectly balanced.

Winter Porter– This is a solid Porter, I personally would have enjoyed a bit more of a coffee nose but it is just the thing on a cold winter’s night.

Belgian IPA– A little unexpected, I don’t think of a Belgian when I think of CBC. However it just goes to show that an experienced brewer can produce a nicely balanced quality beer of any type or style, the entire Brew Crew enjoyed this beer. 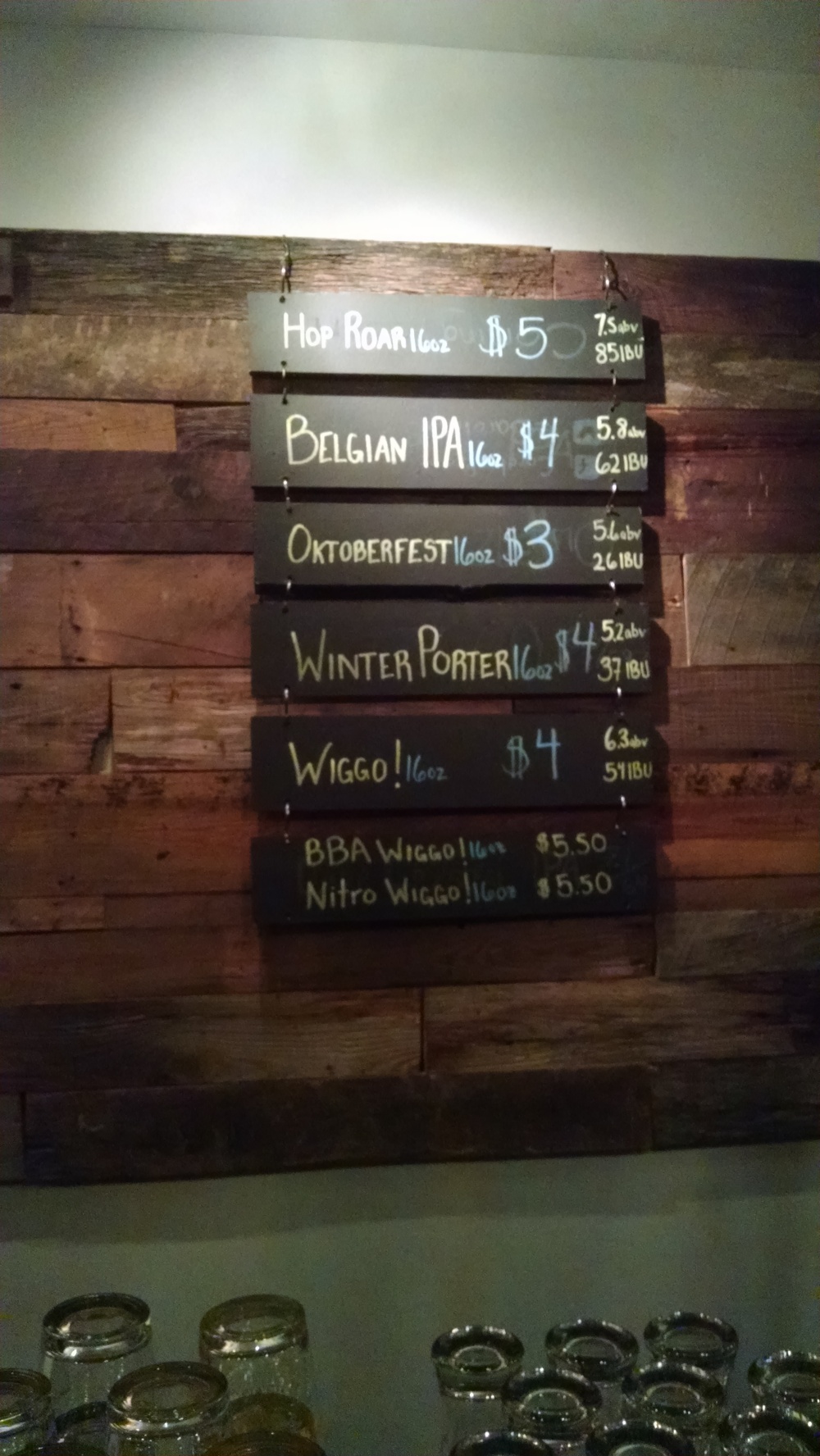 Keeping it simple doesn’t mean it is boring or easy. It just means eliminating clutter, the unnecessary or the distractions that take away from the experience. This is the way they brew, remember just four ingredients. It is a model that has served this brewery for 20 years. I, for one, am looking forward to the next 20 years.