The half-pony, half-raptor tap handle has been spotted roaming about at bars and restaurants throughout Durham and the Triangle for the past few years. (You had one job, Phil! One job!)

But hold on to your butts: Ponysaurus is now open with their own taproom on Hood Street in Durham. They started their soft launch the last week of September (9/29), but, alas, we didn’t get wind until a grilled cheese truck alluded to their opening on Twitter. But things gained traction pretty quickly: Ponysaurus sent an email to their listserv of waiting craft beer fans and Indy Week ran a story about the opening, so by the time we visited (Day 3: October 1) the brewery was already attracting a nice crowd. The subsequent launch party attracted over 3,000 people.

It’s easy to miss (when there aren’t 3,000 people standing there): the back door is on Hood Street where the address is. The front door is at the corners of Ramseur and Fayetteville streets, but it sounds like there will usually be a food truck parked out front as an X marks the spot (Pie Pushers was there the night we visited!). It was a family friendly atmosphere (in fact, the baby channel was on with a creepy Thomas-the-Train-esque tractor going around stalking people…), and there were plenty of seats at the bar, plenty of bar tables, and a promising outdoor upper deckand patio. Service was friendly and knowledgeable, and the managers (and brewmaster) were on hand for the launch.

We tried all of the beers on tap (they also had at least two guest taps):

You can grab snacks for $1 a scoop, glassware for $5 a pop (we bought several taster glasses for a party), and the bar is dog-friendly. On a recent return visit, we also had the opportunity to see LITERALLY THE FIRST CAN roll off the production line (behind the bar, visible to those sitting at the bar). The Biere de Garde is the only Ponysaurus currently in canning but it’s available at Wine Authorities and other fine bottle shops with strong local selections. We’re excited for the addition to this previously unloved corner in Durham. 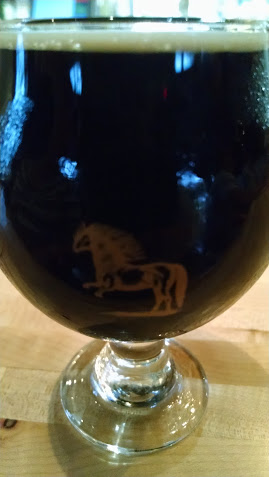