The outer banks of North Carolina in a special place, there is so much to do and so many thing to see. It was the home of the first colony and some of the most notorious pirates in the world. This is the perfect place to brew beer if you ask me. Plus the town of Manteo is one of my favorite small towns to visit, full of history and beauty.

This brewery is attached to a restaurant called the Full Moon café and the brewery was formerly known as the Full Moon brewery when opening. Recently, due to consumer confusion over the beers name (people were getting it mixed up with Blue Moon) this brewery is in the process of changing names to the more unique Lost Colony Brewing. This identity crisis can be found in the brewery’s signage, growlers, untapped listing and brewery list on beer and brewery blogs like this one.  Name changes are difficult and this one is not occurring quickly which seems to add to the misunderstanding. When at the taproom I asked people drinking at this establishment what the name of the brewery was and the answers were a 50/50 split between the two identities, this is a real problem when it comes to spreading the praises of a new beer you are excited about. 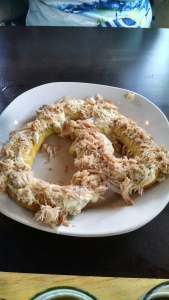 I ate lunch with my family at the Full Moon Café and sampled a fight during that sitting, later that evening I enjoyed a visit to the small taproom for another flight.  The food at this café is good; I enjoyed a teriyaki tuna sandwich. Nicely prepared I would happily order it again. But the show stealer was an appraiser, a soft Pretzel topped with cheese and lumped crabmeat. This was a huge hit at our table. A visit to this brewery would be enhanced with a visit to the attached restaurant.

The Taproom of this brewery is a small but comfortable space. Most of the brews are made on sight in small two barrel batches however to meet demand Lost Colony Brewing has started renting some brewing space at Weeping Radish Brewing in Grandy, NC (North Carolina’s oldest Craft Brewery). The small size of the taproom prohibits live music but encourages conversation with your friends, other patrons and the friendly staff, which can be enjoyable enough that you will not likely miss musical entertainment.

The beers of this brewery, like the community they are brewed in, are following the English style tradition. These beers are sessionable ales and are mostly brewed using English hops and malts. I know many craft beer enthusiasts seek German and Belgian style beers and English style beers often go unsung; however, North Carolina has a number of top notch brewers of this style of beer well worth exploring. Fortnight in Cary, Good Hops at Carolina Beach are some of my favorites producing quality beers in this style of beer. Lost Colony Brewing can easily find a spot in this club.

Blonde Ale– This was my wife’s favorite of the beers we sampled. It was closer to a English ale (only lighter in color) a mild light colored beer with a nice flavor. A great beer to have with lunch or playing cards with friends you only partly trust (I play cards with a lot of guys like this).

Brown Ale– This brew has slightly nutty hint and a good fall beer. It is a nice beer to drink when watching a football game or sitting around a fire pit with the family on a cool fall night.

Imperial Stout– My favor of this brewery’s selection, it is rich in flavor and full bodied. It would pair nicely with Beef stew or roast beef. I love a beer that is bold and this beer hits the mark.

ESB– Tradition dictates that you can’t have a brewery that specializes in English Style ales without a good example of an ESB on tap. I’m glad to say this brewery did a good job of checking the box with this beer. I know in North Carolina it is unlikely to have an ESB that is the best selling beer at a brewery or taproom but hopefully craft beer drinkers will try this version of the style along with Greenman Brewery’s ESB, Fortnight’s ESB and grow an appreciation of this beer style.

Manteo and the out banks isn’t the next destination college students will flock to inorder to celebrate spring break, Senor Frogs will not likely open a new location in Manteo. The Outer Banks will not be home to a nationally renowned wet tee shirt contest. It’s a place where family’s vacation and friends go fishing. This is why a brewery that produces craft beers with reasonable Alcohol By Volume (ABV) can be best appreciated. This brewery fits in well with Manteo’s laid-back atmosphere and is a good place to sample the art of craft brewing. Stop by and share your experience with us.

Michael Cole lives in Sanford, NC, and loves great food and beer. His taste tends to favor malts over hops so he’s an avid fan of ambers and dark beers.   Follow him on Twitter @barbqguy44