Most North Carolinians probably only know Asheboro as “that town where the zoo is.” And that’s cool — it’s a good zoo. But we recently discovered another reason to make a special trip to Asheboro: Four Saints Brewing Company.

The good folks at Four Saints recognize that most visitors to Asheboro are probably there for the zoo, of course. Three-quarters of a million visitors pass through the doors of the North Carolina Zoo every year — “That’s why we have changing stations in the bathroom,” said Joel McClosky, one of the owners of Four Saints and the bartender on the June Saturday of our visit. Joel was exceedingly friendly and welcoming from the moment we sat down at the stylish stone-with-glass-flecks bar in the Four Saints tasting room. When we told him we had come all the way from Durham just to visit Four Saints, Joel even offered to do a little dance for us (we settled for some mild shoulder gyrations). 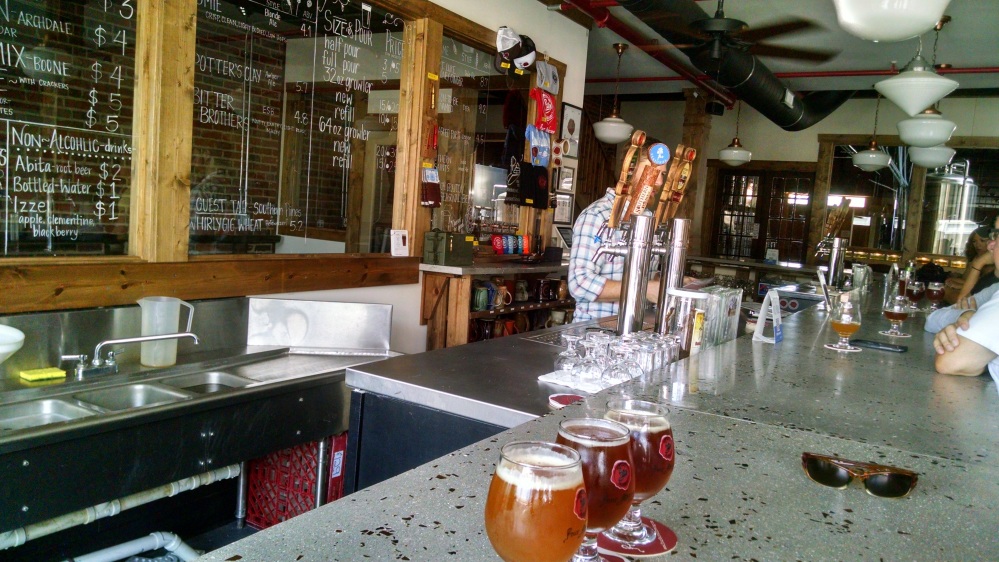 He also happily shared the Four Saints story with us. Joel and head brewmaster Andrew Deming launched a Kickstarter campaign in the summer of 2012 to bring a brewery to Asheboro — now Four Saints is the only brewery in a 30-mile radius. It officially opened less than two months before our visit, on May 6, 2015. Our eyes

were drawn to the collection of handmade pottery beer steins behind the bar; Joel explained to us that part of the Kickstarter campaign included a pottery mug club, where donors of a certain level received their own numbered mugs that would be reserved for them in the tap room. Neat idea that fosters a sense of belonging for early supporters.

There were about 20 people in the tap room when we visited early on a lazy Saturday afternoon. The space was adorned with images of four saints on support beams — “the patron saints of beer” that gave the brewery its name (Saint Wenceslaus, Saint Nicholas, Saint Luke and Saint Augustine of Hippo). The saintly decor gives the bright, airy tap room a classy vibe — I enjoyed the distinctive branding.

More importantly, I enjoyed the beer, too. Four Saints does not feature an IPA or pale ale on its year-round menu; in response to all the focus on hops in the microbrewing community, Joel and Andrew wanted to focus on malt-forward beers — their staples are an ESB and an amber. But people asked about an IPA, so they produced a couple of those just to show they could, as Joel put it.

And they certainly could.

You Asked For It is a very nice session IPA (4.5% ABV) with an amber color and a crisp, mild, clean finish. With 50 IBUs, it has some hop on the nose and the aftertaste, but it is not overwhelming. A nice summer beer.

Southern Saints India Wheat Ale is a collaboration with Souther Pines Brewing Co. — a neat hybrid between a wheat beer and a traditional IPA. It has the light, cloudy appearance of a wheat ale, but it appeals to hop lovers with 63 IBUs. At 6.9 percent ABV, it is not as light as the session IPA.

Potter’s Clay Amber (5.7% ABV) is one of the Four Saints staples, and it might have been our favorite beer on their menu. Full bodied but drinkable, this amber is a little malty but not overly so, with very nice light caramel notes. Very clean-drinking.

Bitter Brothers ESB (4.8% ABV, 48 IBU) was our other favorite — if you like drinkable English ales, you’ll dig this one. Earthy, malty with a great light roast flavor. This seemed to be the most popular beer we heard other patrons order.

I sometimes find blonde ales to be boring, but Four Saints’ Omie Blonde Ale (4.1% ABV) was not. Light, crisp, very drinkable and refreshing, it’s a blonde with nice light cream notes, a bit like the El Toro cream ale at Durham’s Fullsteam. This is a lovely summer sipper with a bit of honey on the nose.

Finally, St. Luke Honey Ginger Pale Ale (8.7% ABV) was the most unique beer on the menu. Featuring a strong honey flavor, this is not a one-note pale ale — it strikes a chord with multiple layers. Strong and sweet, trends toward a Belgian style ale, with some gentle hop on the finish.

We were sad that there were no Belgians or stouts on tap on the day we visited (they had some that had recently been tapped out; we plan to return for some of their intriguing-sounding fall projects). The brewery plans to release one special, limited-release beer in honor of each of its four saints, rotating from season to season. St. Luke’s Honey Ginger Pale Ale was the summer beer; we can’t wait to try the St. Augustine Jalapeno Smoked Brown Ale.

Whether or not you plan to visit the elephants and giraffes, Asheboro is now a worthy destination for beer-lovers.