So we all know “that guy” who has that really cool man cave, where he and his degenerate friend hang out all the time drinking beer. Maybe he has built it in his old barn, a garage, or boatshed. Maybe you’re lucky enough to be one of his degenerate friends who are there all the time. Well Gizmo is kind of the commercial version of that place, and I like it. Only they also make a nice selection of really good beers there. 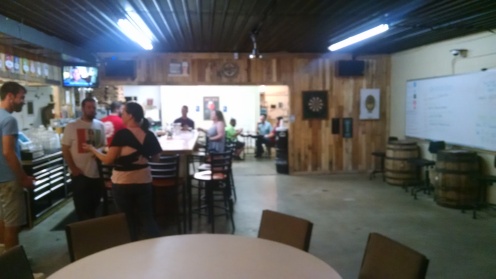 Located near the Research Triangle Park and the Airport of 70 this brewery is tucked away in the very back of an industrial park, in an older warehouse. It is a mixture of dive bar and man cave. The Taproom might have a no frills feel to it, but with a friendly staff and colorfully sociable staple of loyal customers, a good time is easily found. Concrete floors, roll up doors, a few basic tables and a relaxed bar describes the taproom. It is not as large as it should be, and no one is going describe it as polished. But something about the place feels comfortable, something make you want to stay. The (too) small Brewhouse was open to view from the bar. We watched as the brewers were hard at work cleaning the majority of the four hours we were hanging out. The casual beer drinker might not realize that a good brewer is also a good janitor. Cleaning is a major and important part of the job. Our plan when visiting a brewery for “First in Flights” is to spend an hour or two and the go to another brewery. We had no desire to leave Gizmo, we did only one brewery visit that night and I still consider it a productive night. Like many breweries they are a dog friendly establishment so for those who like to drink with Rover he is more than welcome. Some of the best food trucks in the triangle frequent Gizmo so there is no reason to eat before you come out. With the weather turning warmer the outdoor beer garden is roomy and often offers live music.

Gizmo could have easily been called Phoenix brewing as it ascended from the ashes of Roth Brewing. Let’s just say the former brewery had problems and Gizmo spent much of its first year educating the public that they were a totally different brewery that simply occupied the space. They were not a rebranding of the old brewery. Gizmo Beer Works name is because the owners are self-proclaimed tinkerers. They place a high value on innovation. It is my understanding that they are regularly customizing their equipment to improve the process. Maybe this has set the culture for all the staff at Gizmo as outside the box thinking can easily be seen in other aspects of the business. A great example of this can be seen in the fact that Gizmo grows their own hops (well some of their own hops) right in the industrial park. They have only had one harvest so far but it was a successful one. It usually takes about three years to be able to get a full harvest from hops, so each of the next two years we as consumers can expect a few more very locally grown IPA’s from Gizmo. The innovations continue with the beers themselves, here were a few of our favorites… 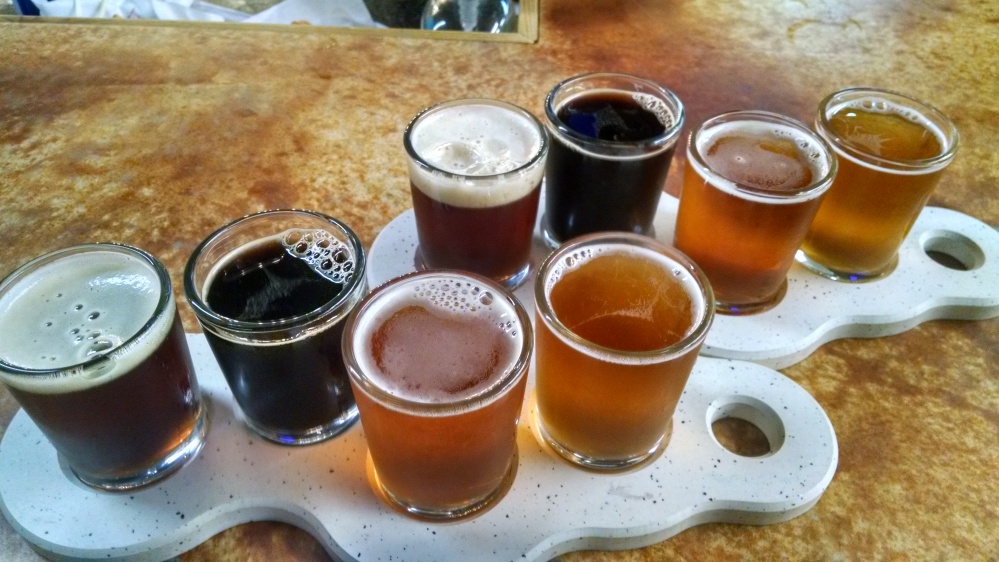 EarthQuaker Oatmeal IPA– We really enjoyed the twist on Craft beers most popular style. The oats seem to balance the hoppy nature of the beer. Giving it a great over all taste.

Black Stiletto Stout – I love dark beers and this is a really good one, nice roasted tones and a clean finish. I can see why it appeared to be poplar with so many patrons at the taproom.

Super Genius (A Gizmo & Fortnight Brewery collaboration)- The most fun beer we tried a Gizmo and probably of favorite. It was described as a “Mild English Imperial” which to me sounds like an oxymoron. I really enjoy English beer and that is the base of this beer, but Joe (the head brewer at Gizmo) has put his creative twist on this beer with a clearly detectable happiness that makes this like no English beer I’ve sampled.

Palisade Wasp IPA– a solid hoppy forward IPA. I’ve heard it said many times (but I don’t agree) “Every craft brewery must have a good IPA. Gizmo has one and while I personally believe many of their other beers on tap are more exciting… If you are an IPA drinker, you will not be disappointed with this beer.

Tripel Digits– This might not be a brewery known for Belgium beers but they demonstrate that they can successfully make any style. I like their Triple version as it is not a sweet as most. It still has the fruity notes but has a bit more of a spice emphasis.

Trebuchet Barleywine– This beer was not on tap the night we were at Gizmo however they did have it in bottles. My buddy Ed turned to me late in our stay and said “We have sampled everything on tap, how about spitting a bottle of Barleywine?”. Looking back, I can’t decide if Ed’s suggestion was inspired or the devil speaking though him. This is my new favorite Barleywine. It has a cherry forward taste with a smooth almost creamy finish, that is reminiscent of a milk stout. A bomber of Trebuchet is how I plan on getting thought my next snow day.

Gizmo is a perfect place for RTP employees to go relax. The inventive spirit is one that Tech professionals will truly appreciate. This is a great Brewery to help you forget how difficult your week has been. It definitely worked for us. Stop in to Gizmo and let us know about your experience.