Raleigh Brewing Company (RBC) beers have been no stranger to the fridge in my home for quite some time. My wife is a fan of “Hell yes Mam” and long before visiting this brewery I’ve enjoyed “House of Clay”. So why has it taken me so long to visit this Capital City Brewery? I don’t know, I have no reasonable explanation or excuse. After visiting it once with my friends (also known as the Brew Crew, I then revisited RBC with my wife two weeks later. I feel certain I’ll be back again soon.

Since it is located in an old industrial facility, just outside of the NC State University campus and right across the street from Meredith College, I guess I was expecting (or fearing) a frat hangout. Instead, I found the patrons to be diverse in age.  The taproom is a roomy pleasant space with fantastic murals that pay tribute to North Carolina’s capital city. The entire taproom is sporting a Red and Black theme, the colors of both NC State and the NHL’s hometown team, the Carolina Hurricanes. With flat screen TV’s above the bar and dart boards available for patrons to enjoy, this brewery has a fun sports bar feel. 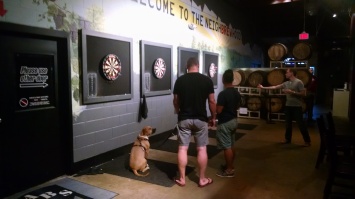 The old covered loading docks have been converted to outdoor seating that is popular on mild Carolina nights and an area of the parking lot acts as a beer garden complete with picnic tables. Many of Raleigh’s finest food trucks frequent this establishment. As with many breweries in our state, dogs on a leash are welcome – so bring your best friend for a beer.  Over all this is a comfortable place to grab a beer. 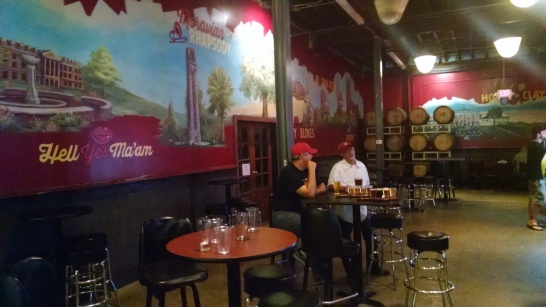 Like the vast majority of North Carolina breweries, the real focus is on the beer and this brewery has an expansive selection of good beer to choose from. This is my favorite thing about Raleigh Brewing – you can go there with a group and feel comfortable. Everyone can find a beer style they enjoy. Some of our favorites include these below…

I can easily see why any Triangle resident might choose Raleigh Brewing Company as their default home brewery. Its diverse beer selection means everyone in your Brew Crew can easily find something they enjoy. It won’t be long before I am retuning and I will likely bring a crowd. I would encourage you to drop by Raleigh Brewing next time you’re in the Capital, have a flight or pint or two and let us know about your experience.

Michael Cole lives in Sanford, NC, and loves great food and beer. His taste tends to favor malts over hops so he’s an avid fan of ambers and dark beers. Follow him on Twitter @barbqguy44