From 2006-2010, Virginia and I lived in Durham near the old South Square Mall and the most out-of-place building in the Triangle, University Tower. During that period, we watched as the area’s restaurant and retail scenes struggled to reinvent themselves. Target and Sam’s Club found success in the area, and not far from their plaza stands the SouthCourt Building at 3211 Shannon Rd. It looks like a modern office building, but it has featured a series of restaurants and other businesses (a jewelry store, now a gym) in the bottom level. For a while, one back corner of the building featured the upscale Restaurant Starlu. That closed in 2007 and was replaced almost two years later with Restaurant Eden. Alas, Eden didn’t last, either.

But G2B Restaurant and Brewery has made it in the space for four years and counting. And that’s no small accomplishment. “This is a hard location,” the general manager, Katie, acknowledged during our long visit on a Wednesday night.

We asked our waiter what G2B stands for; the answer is “Grill 2 Beer.” Katie said that one customer recommended they change it to “go to back,” so that customers know how to find the restaurant. That’s a winning idea.

We found out about G2B from our favorite bartender at Mystery, who recommended the burgers and the eclectic beer list. But we didn’t actually check it out for ourselves until we discovered that G2B had started brewing its own beer. The day we learned that, we showed up at G2B for dinner and drinks, and it turned out to be one of our favorite dining and drinking experiences in quite a while. This place is a hidden gem, truly.

When you make your way around the corner and locate the entrance to G2B, you’ll be immediately struck by the sleek modern decor — this place feel right at home in a trendy area of New York or D.C. You’ll see a number of cut-out circles of varying sizes along the ceiling and walls, backlit with lights that change color, corresponding to the backlighting behind one of the space’s two bars, which face each other across the dining room. “Oh, this is messed up, man!” Virginia gasped when she noticed the lighting behind the bar changing color. The four TVs behind the main bar show black-and-white classic movies on mute, from “To Kill A Mockingbird” to “Citizen Kane” to “Gone With The Wind,” etc. This ain’t no sports bar. 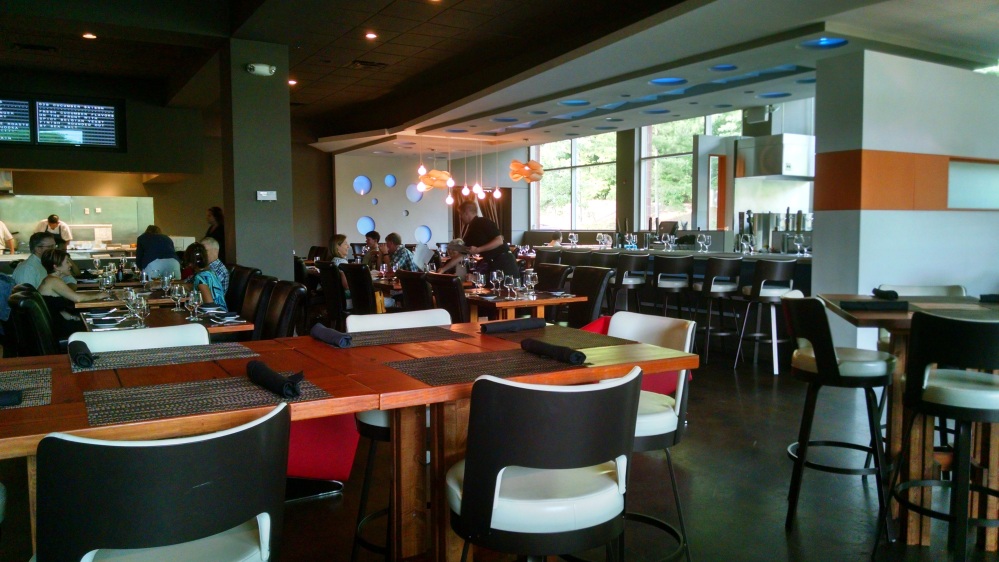 G2B is the sister restaurant of an extremely hip (probably too hip for its own good) restaurant in Chapel Hill called “One,” where your amuse bouche is plated on a miniature rock garden and your bread comes with butter made from the ashes of yesterday’s fire, or something. G2B shares some of One’s modern sensibilities and its

emphasis on quality, fresh food, but it is much more accessible. “We’re the awesome redheaded stepchild,” Katie said. It’s definitely funky, but not pretentious. And the food was outstanding, from the shrimp-and-polenta appetizer to my beef entree and Virginia’s clam pasta, to the superb desserts. Be prepared to spend a little money on dinner; it’s worth it.

But this would be a neat place to hang out for drinks too, so don’t be intimidated by the modern decor — we’ve never been welcomed as warmly at any other stop in our tour of the state’s breweries. By the time we left more than three hours after we showed up, we felt like Katie and the head chef/brewmaster, Travis, were our old friends. They had four of their own beers on tap, and we sampled all of them in a

flight, but once we got talking, Katie and Travis kept bringing us samples of other exciting beers they had bottled in the back (they even tapped one keg especially for us to try it). They invited us behind one of their two bars to check out the brewing operation, which is small and elegant, visible from the dining room and the bar. We joked that they should put up a sign on the bar that says, “Free brewery tours” with an arrow to the other side of the bar. Travis said they have under a barrel capacity — they brew about twice per week, producing about 12 kegs per round.

G2B built its small brewing operation last summer, got its permits in December and officially started selling its own beer in January. Because of their smaller operation, they can afford to take risks that many larger breweries wouldn’t dare to take — we loved G2B’s experimental flare.

First of all, Travis’ Coconut IPA was my single favorite beer of 2015, hands down. I’m a sucker for coconut porters and brown ales, but I’d never tried a coconut IPA, and

this one was just beautifully executed. Aged in a rum barrel that Travis purchased from Copenhagen, the beer takes on some of that oaky rum flavor, which is a perfect complement to the strong coconut notes, and the hops add some subtle nice tropical fruit to the mix. I could drink this beer every day forever; but alas, it was no longer on tap, and we only got to try it because Katie brought out a special bottle from the back. It certainly showed off Travis’ brewing chops.

G2B also used that rum barrel to age a Peach Double IPA, another beer they brought out just for us that has not yet been tapped. They broke out an Elderberry Summer Stout, which was a delightfully drinkable, light stout with lots of fruit that maintains its balance — reminded me a bit of a port, and I suggested they offer this beer in the “dessert drinks” section of their menu, which includes several beers. They let us try a special version of their Cucumber Saison that was made with oysters — not just the

rind, but the whole oyster, which gives the beer a nice saltiness to complement the powerful, fresh cucumber aroma and taste (Travis describes it as “cucumber to the face”). In that same family of fresh vegetable-infused beers, they even created a beet beer, which has a deep reddish-pink color and a wonderful earthiness. We half-joked that they should get into business with the gym in the space next door — drinking this beer makes you feel healthy!

As for the actual beers on tap, G2B reserves four taps for their own beers and four taps for other North Carolina brews from places like Fullsteam and Mother Earth. We enjoyed our flight of the four G2B beers: 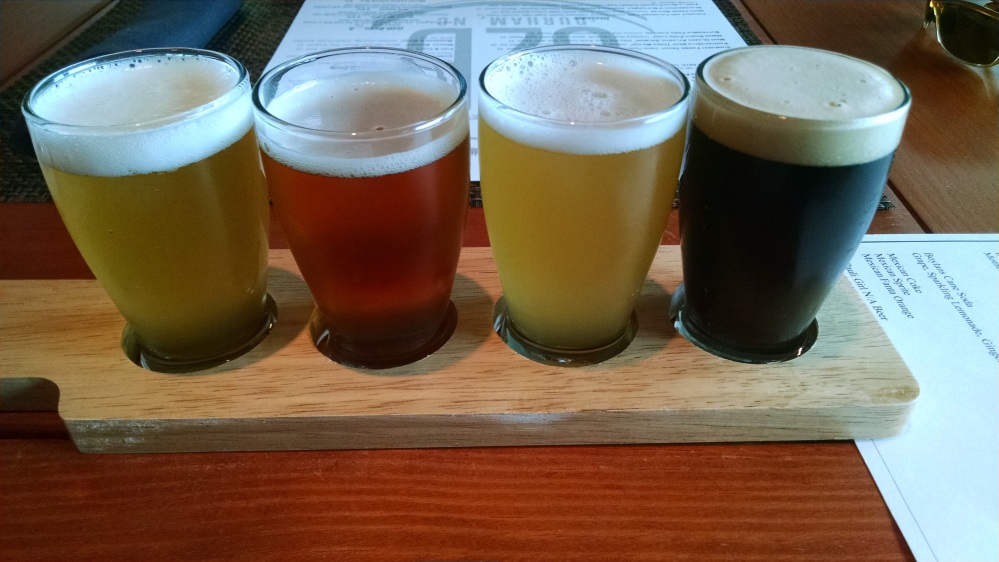 Citra IPA – Virginia and I both thought this was one of the best IPAs we’ve had this year. Very floral hops nose, with a lingering bitter citrus finish (made me think of grapefruit). They describe it as having a strong malt backbone, which we think lends it a creamy start.

G2B Meyer Lemon Cream Ale – This unique beer has a sugared lemon nose like a dessert, leads you to think it’s sweeter than it is. It’s got an illusion of sweetness, but the lemon gives it a little citrusy bitterness. Katie compared it to a shandy, which is an apt comparison, but it leans more toward the beer than the lemonade. Refreshing summer drink to enjoy out on the G2B patio.

Black Milk IPA – Another very nice and very unusual beer. You’ll get a strong cocoa nose, with a mocha flavor. Smells like a milk stout, tastes rather like a milk stout, but with a little hop bitterness lingering on the finish. You won’t find many blake IPAs like this one.

Hefeweizen – This is a pretty standard hefeweizen, floral and citrusy, clean, very refreshing. Does not have a meandering finish. Nice example of the style.

I’m looking forward to getting back to G2B on a Friday night for some live music in their rear jazz lounge, or just any time I feel like some great drinks, great food or great company. I expect G2B will find a regular place in our Triangle rotation. Check it out — help turn that “tough location” into a prime destination.