Moore County is home to some of the best golfing in the Ol’ North State and is quickly becoming a destination to sample some very good craft beer. Only six miles separate the two premium craft beer breweries of Moore County — Southern Pines Brewing Company and Railhouse Brewery. Each of these breweries offers unique experiences for beer lovers.

Southern Pines Brewing Company, located in an industrial park in the middle of horse country in Southern Pines, is truly a hidden gem. It is a great place to visit after a day of golfing in the area … or a good place to spend some time instead of golfing. The Taproom is well lit, wedged between windows leading to the outside and windows leading to a brightly lit, stainless brewhouse. The bar and furnishings of the taproom are designed to remind patrons of old oak barrels. 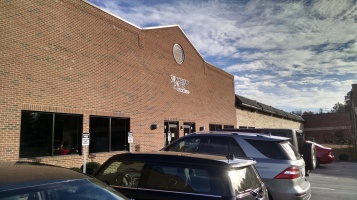 Refreshingly, it is a family friendly area where a parent can drop by with their kids in tow without worrying social services will meet them at the door. The Saturday afternoon that I visited the taproom there was more than one family enjoying the comfortable surroundings. On the downside, the taproom doesn’t appear to have a stage or location suited for live music and with one midsized flat screen, it isn’t the ideal location to watch the big game. Additionally, no food is served at Southern Pines Brewing Company. 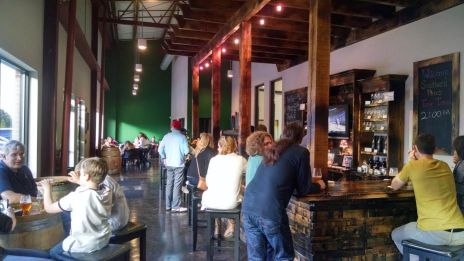 The beer selection, however, is diverse. There is something for everyone’s taste. Some beers of note are:

The Taproom was well staffed for prompt friendly service. The bartender I encountered was knowledgeable and excited to share his interest and enthusiasm for beer with patrons visiting. Flights come in groups of four of your selection. They also sell attractive growlers that would look great on anyone’s home bar.

Railhouse Brewery can be found next to the railroad tracks of downtown Aberdeen. The taproom is dimly lit with a dark wood, roadhouse-style bar. The taproom is decorated with military memorabilia, and one wall honors those who have made the ultimate sacrifice. The décor of the taproom is a nod to its owners who also served our country. Dartboards and bar games can be found to help entertain patrons and live music is sometimes available on weekend nights (but not on the Saturday night I visited). The taproom does serve a limited selection of pub food, which is good if you get hungry. The service was adequate, no one at the bar appeared to go thirsty and the staff of two servers was available if you had questions. However, they seemed more interested in conversations with each other than with the customers. The success of the brewery might be starting to impact the taproom, as on the day of my visit no less than six large pallets of bottled beer were simply sitting in the dining area floor along one wall. It appears they are running out of storage space. 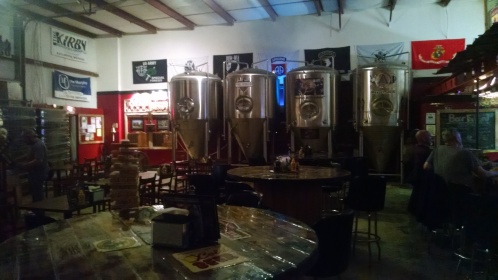 The darkness doesn’t end in the taproom; Railhouse is well known for its mastery of dark beers. Now might be a good time for me to admit that while I enjoy and appreciate almost all kinds of well-made beers, I am slightly biased toward ambers and dark beers. Railhouse has two flagship beers Ka-Bar (an English Brown Ale) and Mastiff (an oatmeal Stout). Some beers of note that I sampled are:

A flight of beers generously includes five of Railhouse’s finest, plus two of their seasonal selections.

It would be hard to write about these two Moore County brewers without comparing them. They are very different. I would encourage you to visit both and share your opinion.
I believe that Southern Pines Brewing Company would appeal to a wider range of craft beer enthusiasts and novices alike. It is the type of place you might take your boss, client or in-laws. Both the beer and staff will reflect well on you.

Railhouse Brewery is a fun place to have a pint or two with your buddies. If you’re a fan of dark beers, it is a must that you sample the mastery of the brewers at Railhouse.

Michael Cole lives in Sanford, NC, loves great food and beer. His taste tends to favor malts over hops so he an avid fan of ambers and dark beers.